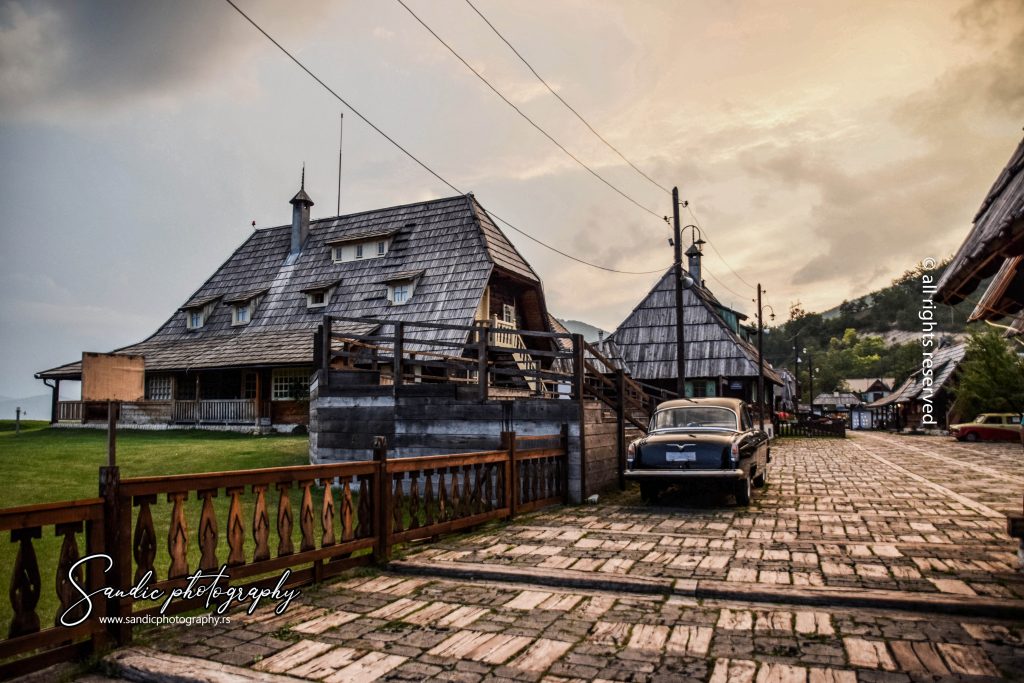 Located at the crossroads of two beautiful Serbian mountains, Zlatibor and Tara, on Mećavnik Hill, the ethnic village of Drvengrad was built according to the idea of ​​film director Emir Kusturica for the purpose of shooting his film “Life is a Miracle”. It is also known worldwide as “Kustendorf”, a beautiful Mokra Gora nature park with only 605 inhabitants in the municipality of Uzice.
Drvengrad is a rectangular ethno village whose long axis at one end has an entrance gate, from where the main street starts and extends to the other end, where there is a small wooden Orthodox church with a wooden bell tower.

The church is built on the model of Russian log houses and is dedicated to the founder of the Serbian Autocephalous Church, St. Sava. In the center of the village, the square is paved with wooden cube and cut wooden doorsteps and surrounded by authentic log cabins, which were transported from the surrounding parts of Serbia and Republika Srpska in the form of skeletons and laid on stone foundations.

The streets in the village of Drvengrad bear the names of celebrities from the world of culture and science. The main street is named after the Serbian Nobel laureate Ivo Andric, and there are also the streets of Cuban revolutionary Ernest Che Guevara, Argentine footballer Diego Maradona, Serbian actor Miodrag Petrovic Ckalja, and world-renowned directors Federico Felini and Ingmar Bergman. One street also bears the name of one of the best tennis players in the world, Novak Djokovic.

Drvengrad is also the venue for the international festival “Kustendorf”, founded by Emir Kusturica, which is conceived as a meeting place for young filmmakers and students of directing and renowned world directors and actors, and music groups.