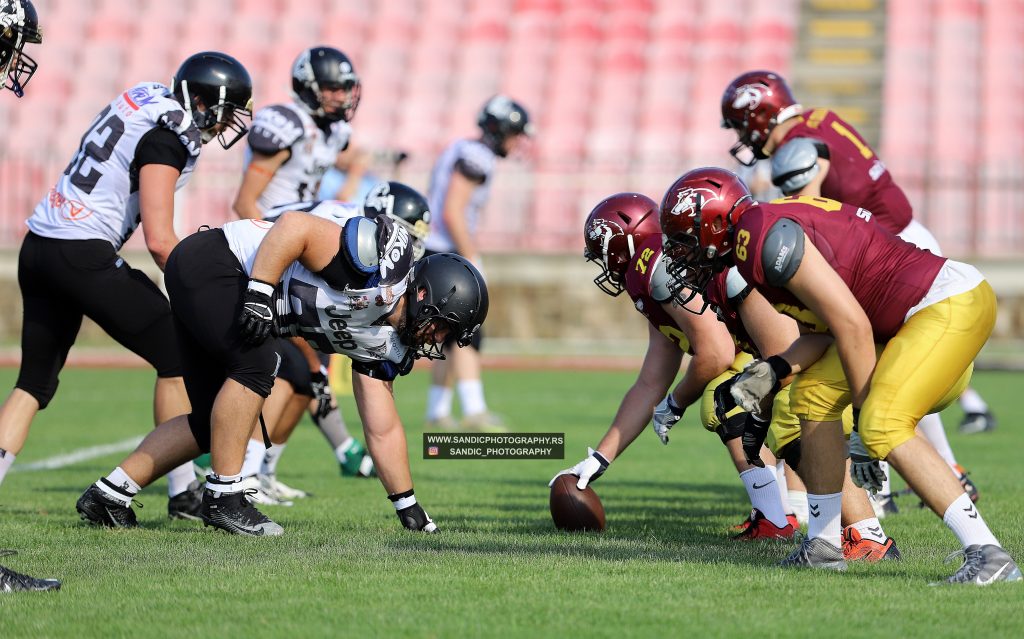 Wild Boars Kragujevac are the champions of Serbia again! In the most effective Serbian Bowl game in the history of American football in Serbia, the Boars defeated Belgrade’s SBB Wolves with 60:55 and the ninth time in history, becoming state champions for the fourth consecutive time.

Serbian Bowl MVP is Nick Laseyn, who has run for Touchdown five times. Particularly significant were his touchdown runs in the last quarter, when he returned the Weaprov advantage to a double-digit difference on two occasions.

The Wolves squad activated injured QB Livaj Plant for this match, and left RB Joe Bergeron out of protocol. The Kragujevci performed in full force.

SBB Wolves surprised Veprov with an onside kick from the first action and reached the ball. They marched to the end zone and TD was scored by RB Joseph Ferguson. The Wolves tried a two-point conversion but failed (6-0).

The Wild Boars responded immediately. After a few screen actions, they came within three yards of the end zone and the drive was completed by RB Nick Lasein. Petar Goic hit PAT by 7: 6. The Belgraders failed to organize a good attack in their next possession. The Boars took over the ball, and QB Jake Sison escaped the Wolves defense for a full 70 yards. After a bad snap, Goic did not realize the PAT (13: 6).

Immediately after taking the ball, the Wolves evened the score. RB Ferguson again escaped the defense of Kragujevac, this time for a full 80 yards. At those moments, the absence of Bergeron was not felt in the composition of the Wolves. Zeljko Stegnjaja hit PAT and set the score 13:13.

The boars started again from their own half. With a combination of passes and runs by Sison and Laseyn, they reached the end zone again when the explosive Lassain completed the attack for 17 yards (19:13). Only then did the first quarter end.

The explosion of points continued into the second quarter. Sison found quarterback Stefan Djuric, who skipped a Wolves defender and then reached the end zone after 32 yards. Goic scored in 26:13.

Joseph Ferguson continued his excellent play. He patiently waited for the offensive line to make holes in the Veprov defense, while continuing his runs with excellent feints. With one such combined run, he scored again when he reached the end zone in 47 yards. The thigh was secure again (26:20).

Then Jake Sison’s All Pro QB with two long passes took the stage, first finding Goic for 52 yards and then young Milos Petrovic for 48 and increasing the hosts’ lead to 40:20. By the end of the half, Livaj Plant, with the help of the Veprovs who made a big foul, managed to reduce the Veprov lead with Milos Kolibar. 40:27 went into the break.

At the start of the second half, the Wolves started the attack well, Nikola Simovic catching a long pass and entering the red zone. Still, the Veprov defense responded admirably, stopping the Wolves’ four tied actions and taking the ball. Sison orchestrated a new Veprov attack with excellent passes for Stefan Borkovic and Filip Nedeljkovic, and Kragujevac’s lead was increased by Lasein (46:27).

At the beginning of the last quarter, the Serbian Bowl was interrupted for 30 minutes by heavy thunderstorms and showers.

After the break, the Wolves resumed their drive and reached the TD via Nikola Simovic, and Stegnjaja added a PAT for 46:34. Then Slavoljub Dukovski cut the pass and returned the ball to the Wolves, who after two fouls by Veprov reached the red zone, and Dukovski himself scored with a TD run and reduced the score to 46:41.

The champions reacted championly at that moment. First, Sison escaped the defense with the right sideline and passed the ball to half the Wolves, and then Laseyn finished the drive with another excellent run. Petar Goic was sure of 53:41. Plant returned the Wolves once again to the game with a new long run (53:48). Nick Laseyn then did the same for the Veprov team after pitch action and a fantastic juke (60:48), and by the end of the match Nikola Simovic and Stegnjaja only managed to reduce the gap (60:55).